established two years ago upon a common decision of its members wanting to have a stable structure for the continuation of their close and long lasting cooperation in a number of EU projects: Senior, Pe
rsonal Town Tours, The wanted Danube. The latter had gained two of the highest European awards.

END_OF_DOCUMENT_TOKEN_TO_BE_REPLACED

“Researchers, practioners, civil structures should go hand in hand with economy” was one of the main messages of the conference. The Danube, the only river running from the West to East of Europe should not be a dividing but, on the contrary, a uniting border. The river merits the future of its past.

END_OF_DOCUMENT_TOKEN_TO_BE_REPLACED 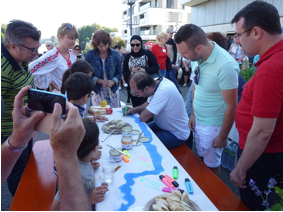 Tastes of the Danube. Let’s taste them, this is how the intergenerational and intercultural meeting we attended in ULM was titled. – Cultural heritage and diversity in terms of food are to be preserved – We shoud be careful about what and how we eat. -Traditional sources and ways of nourishment are getting replaced by food from supermarkets. We are still fed and connected by bread, which used to be staff food in our countries.

END_OF_DOCUMENT_TOKEN_TO_BE_REPLACED

You will find a short documentation in English- giving an overview about older peoples’ organizations and recent initiatives in Germany as well as  BAGSO`s engagement in European and International Contexts.

END_OF_DOCUMENT_TOKEN_TO_BE_REPLACED

Third Age University of Galati – a pioneer project in Romania

On the 28th June 2016, the Senate of the University “Lower Danube” from Galati/Universitatea Dunarea de Jos din Galati, a port town on the Danube in the Eastern Romania, agreed to the founding of the first third age university in the country. Thus U3A courses will officially begin on the 10th October, 2016, the date when U3A Galati is to be admitted as a member to AIUTA (International Association of Universities of the Third Age).

END_OF_DOCUMENT_TOKEN_TO_BE_REPLACED

EduSenNet project- how well do you know it?

Comenius University and its University of the Third Age coordinate the Erasmus + project Educational Senior Network (EduSenNet) uniting the efforts of seven EU partners from Slovakia, Czech Republic, Germany, Sweden, Spain and the Netherlands. Other partners from Poland and Austria focus on the learning of older people and possibilities for inclusion of other people from rural communities.

END_OF_DOCUMENT_TOKEN_TO_BE_REPLACED

RefugeesIN, the title of a new European Erasmus+ project was  Translated into Slovene The Times of Refugees

The new ERASMUS+ project, co-funded by European Union, is a continuation of the finished project CINAGE European film for active ageing which inspired the current partners of RefugeesIn. There is a clear analogy between the two projects and topics. Like older people, refugees are often approached on the basis of stereotypes since stereotypes are handy. Using them, we do not need to develop our own standpoints. It is enough to hear and repeat what our cultural or social group says.

END_OF_DOCUMENT_TOKEN_TO_BE_REPLACED

In Belgrade, the presentation of the „Community of good NEIGHBOURS” was followed by a discussion on how to age with dignity

The municipality Old Town (Serb. Gradska opština stari grad) has been practicing regular face to face consulting with the townspeople regarding their common issues. Different professionals, social workers specialised in working with older people and older people themselves have recognised this municipality as a positive model of a socially responsible municipality. Following the initiative given by Dr- Laza Lazarević National Foundation for Human Aging the municipality decided to support the project titled „Creating a community of good neighbours”. Neighbours used to be extremely important and valued in Serbia, thus the project is culturally embedded and will, no doubt, be successful.

END_OF_DOCUMENT_TOKEN_TO_BE_REPLACED

Pre-retirement education is meant for older workers to remain longer in employment or to adapt to retirement, one of the greatest transitions in the life course: the change, transiting over from the end of the professional phase to post retirement phase of life. At the recent AHA conferences on healthy and active ageing pre-retirement education was one of important topics.

END_OF_DOCUMENT_TOKEN_TO_BE_REPLACED

Dublin based Freebird Club members are encouraged to connect with one another through traveling from one home to another. By being a guest, you can experience a new place through a local’s eyes, staying in a comfortable environment.

END_OF_DOCUMENT_TOKEN_TO_BE_REPLACED

The article explores the connections between social exclusion and ageing. and reaches beyond the assumption that paid work is a major factor of social integration. Social inclusion is made possible through relationships and resources beyond paid employment.