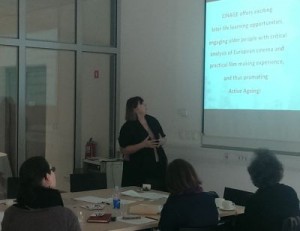 In the same lines, active ageing means that an older person has to remain in continuous contact  and co-operation with other  younger generations. Namely, it is impossible to imagine active older people (who continue learning, having new goals, meeting new people, participating in society) separated from other generations, closed up in social networks of peers, with all their culture and knowledge, already validated by experience, not used and  waiting in vain to be transmitted. A precious possession, of which they can, and should, make a present to peers and those who are mostly younger than themselves.  It can be concluded  that intergenerational learning occurs when one generation needs and appreciates what another generation has to offer: youth work, grand parenting, learning support to school dropouts and young people with specific learning difficulties, cultural guidance and support for young Erasmus students, mentoring young workers at work, teaching young people new skills, etc. But of course, intergenerational learning occurs also when  all generations involved have needs. By meeting them, they all construct new knowledge and outcomes together.

One can not make a present to somebody without having established contact with him or her, without having entered into a dialogue with him or her. Since  todays’ society is getting ever more fragmented, it is also more  difficult to establish natural intergenerational dialogue. The type of dialogue where generations “truly watch and truly see each other, truly listen to each other and truly hear each other” . This cannot be done without a motive, topic, opportunities and support. This is what DANET intends to do: to multiply opportunities and encourage creation of supportive structures for generations to meet and to work together  for  individual and above all common benefit. They will be created on local, national and preferably on European level.

It is often believed that older people are interested only in their tiny personal issues,  that young people are not committed. That is far from being true! If they are  offered opportunities to create together, to give each other, their giving means standing for common interest. Both giving and receiving establish relationships.

Today, generations may be more autonomous.  But, the greater  their autonomy and freedom, the less they feel indebted to anterior generations and the less they are sensible to the fate of the coming generations which un turn makes society less cohesive. Intergenerational learning is about getting to know each other, learning together, co-operating and thus creating intergenerational ties and more cohesive society.
As a response to the today’s crisis of solidarity-in spite of what has been said eCommunity seems to be slowly regaining popularity. Namely, throughout history relating to others, belonging to community of all generations has been a way to get protection against hardships and to get recognition from others, to shape one’s identity and to learn from each other.

Definition and common characteristics of generation

Contrary to what may be expected, generation is not a chronological but a sociological phenomenon. Thus generations are shaped by historical, political, social, economic events and changes. By contrast,understanding generations basically means understanding  social changes and three central aspects of social change can be highlighted:

– changes in the mode/modes of socialization and integration, as well as the destabilization of the model of adult age;

-political relationships and the issue of generational justice which seem to  have been lacking over the last twenty years;

Generations exist due to something in the background, something with a structuring effect like specific experience. To illustrate this point: generations whose members  were twenty years  old in 1968  experienced student revolutionary movements and collective actions all over Europe, stepping out  of the private sphere into the public sphere, whereas young people who are twenty years old in 2015  are highly dependent on private sphere, their parents, their mother and do not believe that they could have an impact on society. Moreover, there are active and there are rather passive generations. They have to get familiar with each other, they have a lot to learn from each other what can be best achieved through  creative and shared processes.

Generations  can have, or do not have common characteristics, similarities and dissimilarities which have to be taken into account while structuring intergenerational dialogue, learning, co-operation or co-habitation.

Intergenerational education/learning offers room to different generations. By means of intergenerational practices they make processes of their socialization and integration visible and help understanding their similarities and dissimilarities.

Theoretical and conceptual background of intergenerational learning and dialogue

There are several socio-cultural or community and community education or community development theories and social capital theories that can be transposed to intergenerational social participation and learning. (Bourdieu, 1983, Putnam, R. D., 2000).

There are numerous theories describing community and community building. Community is often associated with hope and wish of reviving closer, warmer, more harmonious type of bonds between people (Elias 1974, quoted by Hoggett 1997

Thus community can be approached as a value (Frazer 2000, Lindeman, 191o).  In that case it may rest upon  solidarity, trust, norms, commitment. Some definitions of community focus on community as a geographical area; some on a group of people living in a particular place; and others look to community as an area of common life. When community is related to the geographical area theories of urban space are useful to understand the different function urban community has.

To sum up, communities can be based on ethnicity, religion, class, or politics, territory, cultural heritage, interests, as they can be based on learning and education. The nature of intergenerational community is a creation of its members, and it can not be imposed on them. Therefore community is to be understood more as a symbolic structure , and attention has been shifted from traditional community as a form of social interaction based on locality to a concern with meaning and identity. (Cohen,1985).

Consequently, intergenerational learning and practices are mostly based on groups,  mutual needs and common commitment.

Intergenerational practices should preferably be sustainable structures for intergene-rational learning and education about generations  aiming at  consolidating intergenerational ties and communities.